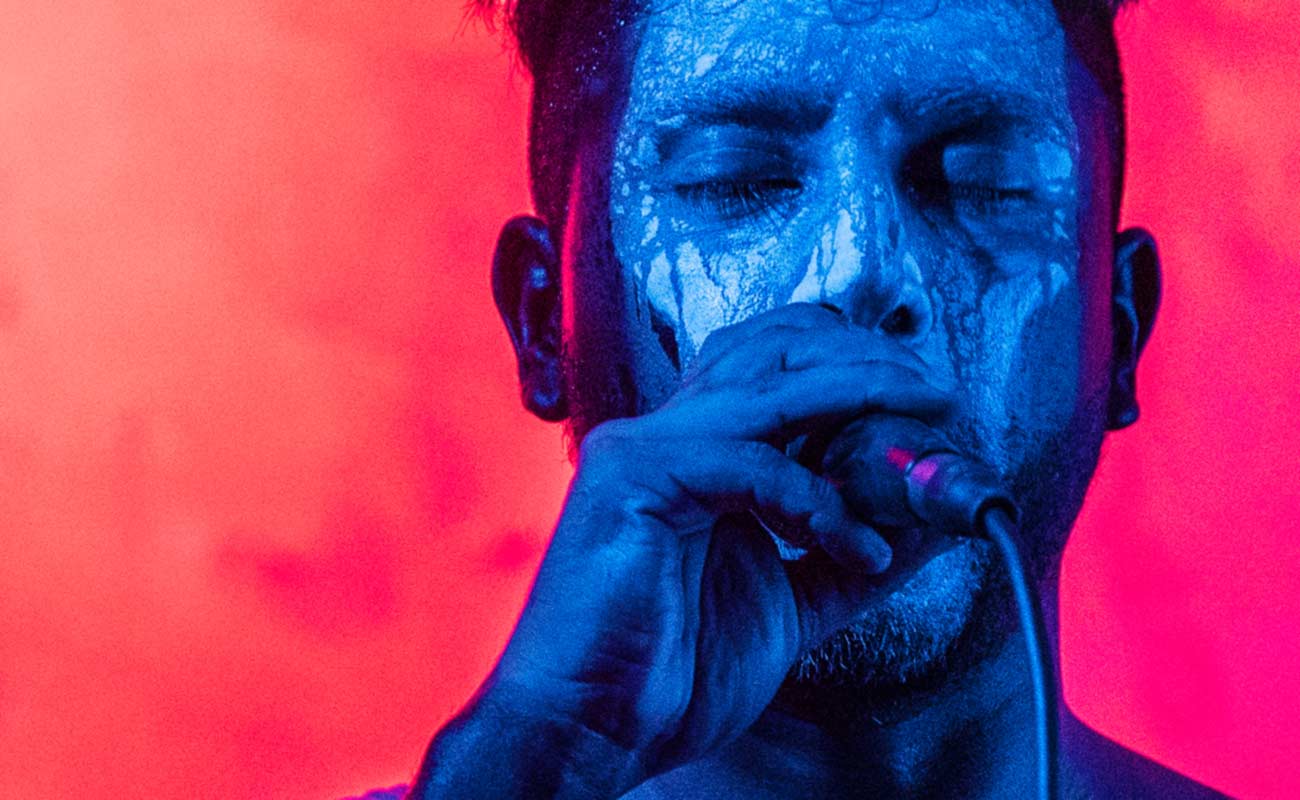 There’s a good chance that This Is Decibel is going to go on to do many great things in music.  For all of three-pieces, this flashy band from New York creates memorable material on their new Take The Life EP – you can hear in the vibrant, colorful, and imaginative melodies they create between their outstanding vocals and exceptional music that this could be the start of something special here.  I felt like these five songs really had something new to offer the ears & like this band definitely has a career ahead of them.

According to social-media & all-that, This Is Decibel has been doin’ their thang since 2016…the Take The Life EPcame out officially in 2017…and here we are in 2018, finding me yet again asleep behind the wheel and late to jump on a bandwagon I’d be proud to ride on.  But I’m here now…and I’m definitely not going anywhere now that I am – This Is Decibel has seriously impressed me with this ingenious EP.

The opening & title-track “Take The Life” immediately sets an exceptionally high standard for a band so early on into their career.  This Is Decibel has created a powerful first impression with “Take The Life” showcasing their versatility right from the drop and mixing up a light-rock style with R&B, Pop, and indie elements adding to the sound along the way in a truly fusion-based effort.  In my humble opinion, this completely works…not only is “Take The Life” expertly played and performed, but they’ve added in so many hooks and access points for listeners to hang on to.  Take the verse for instance, it’s fully-loaded with catchiness that will likely snag you right away…but then you get to that immaculate chorus they’ve written, and you begin to realize that This Is Decibel is quite possibly going to be a band that will always surprise you by just how far they can take it to that next-level.  For real – singer Rocky brings so much personality, character, and charisma to the mic that it’s impossible not to notice.  Joined by MIK (Guitars, Keys, Effects) and Mike on drums – the music shines just as brightly through its amped-up energy and clever transitions between styles & sounds.  “Take The Life” is without a doubt, as fantastic of a start to a record as you could ever hope to hear…a completely single-worthy tune, no question.

But LISTEN to that GROOVE on “Out Of Focus” as it starts!  That’s the audio-recipe for how to pull people right into a tune right there is what that is.  Real credit to this entire band…there’s no doubt that Rocky is going to be a lot of what the general public hear…his technique, tone, and power are simply amazing and stocked full of character & charisma – but when you listen to how well this band interacts together as a three-piece, you gotta hand it to This Is Decibel for the balance of power between them.  I absolutely loved everything about this cut…the guitars are sparkling, the beat is crisp, the vocals are as off-the-charts awesome as they’ll continually prove themselves to be throughout this entire EP – but let’s face facts here, “Out Of Focus” is that kind of vibrantly colorful energy & vibe you’re CRAVING.  You might not know it until you hear it – but THIS is what you’re looking for.  “Out Of Focus” has a wild pace & tempo that is pretty much guaranteed to moves & grooves being busted out by anyone who listens.  TOUGH call between these first two cuts…if I’m being truthful, I think the chorus & execution on “Take The Life” might still be the EP’s strongest highlight earlier on…but if we’re talking songs on the whole, “Out Of Focus” might very well take the prize for its completeness & balance from beginning to end.

“Run” dials back the energy and trades it in for a highly inventive mid-tempo melody.  So much to love about the way this comes together…where to start?  The guitars from MIK are freakin’ brilliant in the verses…I love the filter or whatever is assisting in creating that sound…it’s seriously awesome.  The beat from Mike is as rock-steady & reliable as ever, dude seems to be highly dependable up there on the throne.  And as far as Rocky goes…I can’t help but feel like “Run” was a real highlight for him personally.  When I think about this tune as a vocalist, and the million ways he could have potentially played this one more ‘straight-ahead’ in the way he chooses to sing it…well…it’s the innovative and creative way that he sings these songs and the undeniable commitment & confidence he has on the mic that makes anything good turn to great.  Working a rhythmic approach to the lyrics that fits the vibe perfectly…it’s not so much about how he’s written as it is how he sings it…listen to the way he adds a genuine polish to these words – and in the build-up towards the chorus, listen to the exceptional way he switches the energy & power in his voice as it flows.  Trading in the Brandon Boyd-esque vocals from the first two songs for something that’s almost closer to shinier version of Steven Tyler…Rocky proves just how capable his range is on “Run” and how versatile his own vocals can be in the music of This Is Decibel.

I think the only track I felt slightly unsure of was “Privacy Interrupted.”  Still a decent tune in its own right…and This Is Decibel has already proven to have a shifting sound that can incorporate many ideas…so in a way, it’s not too far of a stretch to get to what nearly sounds like an alt-country tune of sorts.  Does it fit on this particular EP?  No.  Not if I’m being entirely honest, which of course, I always am.  Like I said, still a good tune, but likely better served as a single or on the next record to follow.  As far as hooks and accessibility go – hell, I’d never argue that they put themselves onto about a hundred other different types of playlists out there with the different twists on the sound of their music on “Privacy Interrupted,” there will actually be a great many people that really love this tune to the point where a significant chunk of those people will likely even lean towards this being their favorite on the record.  This Is Decibel gets to examine that over time and the effects of that kind of feedback; people will notice it for sure, because it’s bright, catchy, flashier & all that…but in this particular setting, it nearly detracts from some of the heavier themes and emotional power that the other songs have.  So even though it might stand-out to a whole bunch of ears, which is good, ultimately “Privacy Interrupted” might take some of the attention off all the other hard work they’ve put into the majority of their sound.  On the one hand, people are gonna notice, on the other, people will notice other stuff less…that’s kind of a given on any record in a sense, but once you start to examine the mechanics behind why that might be or what that might tell you about your own sound or the EP, that’s when things might change when it comes to how This Is Decibel creates music or presents it in the future.  If I step back from this EP and listen to it as objectively as I always do, I hear four songs that completely belong together in this set and then the ‘one of these things that’s not like the other one, not like the other one, not like the other one…’  Alright…that reference might be kind of ancient by now, but I’m sure you get the idea.

For me, the return back to their more involved, deeper style & sound at the end of Take The Life on “Rest” is much closer to where I’m at when it comes to this band’s music.  I think they performed at a seriously high standard & professional level throughout this entire EP, they sound spectacular on every tune and are clearly bringing their A-game to each & every song – yes, even on “Privacy Interrupted.”  “Rest” restores the direction of the EP’s first three tunes and rights the course for a conclusive ending.  Loved the guitar/theramin combo that opens the track up, the melody revealed in the verse, the way the drums from Mike come gently into the mix as “Rest” opens up.  Almost heading towards a Red Hot Chili Peppers style in the sound of the verse on “Rest,” but obviously we’ve got a much, much, much better singer in Rocky than they have in Kiedis…so while it might lean towards the RHCP sound, this final cut still offers up the identifiable elements that have made This Is Decibel memorable along the way throughout the Take The Life EP.  As rest shifts into its finale, the background vocals play a significant role in the mix and add greatly to the atmosphere over the length of the final minute-twenty or so as This Is Decibel launches themselves into an unforgettable highlight to finish their EP in style.

There’s really rad stuff happening in this band! None of it’s typical and ALL of it is stunning to listen to. <em>Take The Life</em> clearly shows that This Is Decibel are completely ready for their moment in time, that the future holds endless possibilities for their highly vibrant, highly imaginative, highly skilled tunes, and that they can verifiably entertain the ears with something truly fresh & truly new. DIG these guys!

Find out more about This Is Decibel from their official website:  http://www.thisisdecibel.com/